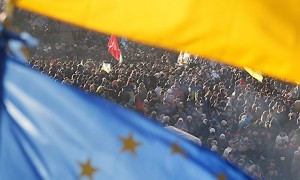 Our conceptual frames come from shared confidence: the first try of scenarios setting on the fire by the western players involved took place in former Yugoslavia in the very end of the last century; then there were “revolutions” within former USSR area – like the ones in Georgia, Kirgizia, first try in Ukraine and so on; then so called “Arabic spring” and everything else we have now burning around the continent.

I remember lively discussions upon whether it was all about inside reasons and grounds or more about outside influence or even indirect support – whether by accident or on purpose. I know no one now who would not involve external factor in one’s analysis. More than that, it had taken a well-deserved leading place and now appears in analytics and media as neutral “technology” as it is speaking about a routine political instrument.

In this context, it should be mentioned that Ukrainian “doomsday” became a first case when and where counter-technology was applied. No matter who had it elaborated, one should be proud as finally unreciprocated and irresponsible politics and human lives manipulating stroke against reaction it had not been prepared for. Remembering the P. Chaadaev’s Philosophic letters, it indeed might be an example of “some great lesson”[i] about which he wrote comprehending Russian being into and for the World. It is not out of place to remind here H. Kissinger’s words recently said in interview for CNN – the main idea was not to push the Russians too far where they decide there is a need to show with what they are able to come up[ii]. However, one of the best advisors ever has been pronouncedly consistent in such kind matters. Almost ten years ago in interview for German “Spiegel” he evenly stated that shifting of the center of gravity of global politics from the Atlantic to the Pacific should not become “a challenge which can be answered with military or ideological confrontation”[iii]. Caution has been completely ignored as well as another advice on wrong of intention to lecture great powers how to behave in the world has been scorned.

Up until a couple years ago, Russian foreign policy has been fairly criticized as we did not yield to none in this respect, being quiet far from desired results. At the Meeting of the ambassadors and permanent representatives of Russian Federation to international organizations in July, 2012 major vector sounded as “a need to affect more actively in situation where Russian interests are directly infringed, to act forestalling, to be ready for any version of situation development…”[iv]. It looks like the Ukrainian case became a start of competent realization of previously set goals. No doubt – up to the moment it is an absolute tactical win of Russia. Techniques and skills used in providing security for ethnic Russians and many others opposed to self-declared authorities in Kiev have deserved special mentioning – outstanding performance no matter where those people with no identification signs came from. All this together makes it quite possible that Ukrainian case will also become the last one for the “nomadic” destructive technology being applied with no or minimum energies on adoption or transformation to regional specifics as it has worked well before all over the places into which it had been injected. This time we finally can talk more about pro-action than reaction and say that directions aimed for preventive work were more or less successfully accomplished. There are a lot work to add especially in the field of information support and follow-through where Russian opponents do not restrict themselves choosing methods and instruments. Still, Russia has overcome the trite destructive technology of the West towards its chosen targets and succeeded to play well in the game invented without her and against her.

For the moment it looks like that Western community had to go more far than they had originally planned. Besides, today more than ever it is difficult to speak about solidity of this community. There is a significant latent confrontation between leading players within the alliance. Germany, obviously challenging the States, UK, always ready to sacrifice someone to own national interests, but is the US ready to become a price paid for UK goals achievement?

None, except for some Ukrainians, doubts that there is a battle on Ukrainian territory for geopolitical status and dominance, not for Ukraine although it may become a prize for the winner or for all involved in case it is fragmentized like it had happened before in the Balkans. Many key actors of international politics are somehow presented in on-going process in Ukraine, but their goals or intentions sometimes vary dramatically or plenty of them can be considered as at least twofold (sometimes more) purposes totally or partly conflicting to each other. Again, for Germany, as an example, Russia is not a number one aim, what does not come from current political rhetoric only, but also from both – declared review of its own place and role on international scene and German public trends strongly displaying throughout last several years. Logical enough to suppose existence of similar trends within public or political establishment at least in some other countries that have not declared it yet.

World media promotes Ukrainian case as an exam for Russian power, but discourse is usually ambivalent and may easily change to opposite. Situation looks like an exam for the US at same level as it is posed for Russia. In some sense, it is even more challenging for the States as they have been a hostage of their own international image for years. Now many may want to find out if correlation between the image and the truth is high. Not all of them could be referred to the US allies.

These tremendous geopolitical issues in the agenda make the format of confrontation, prevent it from any military actions for now (not talking about nazi-movement violence in Ukraine) and intensify verbal squabble and demonstration of the power. Secondary role of Ukraine is displaying in all and every part of big game. Recent military exercise by Russia were to show Ukraine that forces re places and ready, however they were no less to show its multi-level connection system, etc. to the West in order to avoid illusion of Yugoslavian scenario possible. All this super things make more difficult to predict further fate for Ukraine itself as in today’s circumstances it just cannot be an issue of the highest priority even if big players pretend it is. Russia defenses own borders and population first of all, the US fights for image and ambitions of hegemony in the World, Germany – for status increase within Europe, etc.

Ukrainian regions may or may not become a change. In case they do, western parts are not the subject of high interest, except for Poland, probably. For Russian Federation it is kind of trifling matter. Although the interpretation of “western parts”, of course, can be tricky, especially in concern with NATO expansion. Crimea has been already clearly posed as a matter of grave importance for Russia. Future status of the region is a subject for another guessing game. It may become a state and remain like this on the analogy of Abkhazia and South Ossetia if talking about relationship with Russia. It may become a state and then apply for membership in Russian Federation, carrying aforementioned republics. Possibility of another outcome of forthcoming referendum is very low even if there is chance of scaled propaganda to work against existing public opinion.

Other regions of the Ukrainian East (South East) also demonstrate strong inclination to Russia and, of course, may become a subject of interest. However, according to actual rhetoric of Russian officials and general tense situation, it seems more realistic for them to become trade objects in further negotiations between Russia and the West. Some of them then might be sacrificed, some not. Although it cannot help saying – in the light of nazi passing to the offensive with total connivance of the whole Western community strategic alliance with Russia is the best thing they can provide to themselves in sense of security and future development.

Elena Arlyapova is a researcher at the Moscow State Institute of International Relations of the Ministry of Foreign Affairs of the Russian Federation.