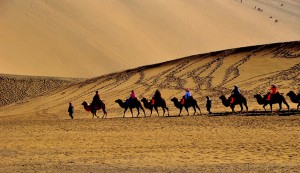 Tourists ride camels on the Mingsha Sand Dunes during a visit to Crescent Moon Spring on the outskirts of Dunhuang county. [Photo/China Daily

China is increasingly present in Central and Eastern Europe. Through investments, credit for infrastructure projects and the growing number of tourists from the country, China has become more politically visible in the region.

Cooperation between China and the 16 Central and Eastern European countries, which spread from the Baltic Sea in the north to the Adriatic Sea in the south, is both bilateral and multilateral.

Bilaterally, with each country, China has agreed on projects and on possible ways to realize them. As for multilateral cooperation, it is done through the "Summit of 16+1", thanks to the vision of President Xi Jinping, who proposed the Belt and Road Initiative in 2013. Thus the Central and Eastern European countries have become important links in a chain that connects Shenyang and Harbin with Rotterdam, Hamburg and other major European ports.

For China, it is important to increase the volume of its trade with Europe. While Central and Eastern European countries hope to attract Chinese investors, gain unrestricted access to Chinese technologies and enter into financial arrangements with China.

In terms of financial arrangements, one thing is very important; in contrast to the initiatives of the International Monetary Fund and the World Bank, which are aimed at maintaining monetary and/or fiscal stability in order to maintain and control (unrealistically high) budget spending, all China's initiatives related to financing and credit arrangements are aimed at development.

That there is a multilateral framework for cooperation and rapprochement between the Central and Eastern European countries is also important.

These countries differ in many aspects: in size of territory, population and GDP per capita, as well as their position in the system of international relations. Except for Poland, which can be regarded as a "middle power" (and perhaps Romania, which might be classified as "middle-low power"), the other countries are in the "small" category. Since all of these countries are either European Union or NATO members, or have various agreements related to the cooperation with the EU and NATO, their space for conducting an independent foreign policy in the existing framework is very narrow. The new multilateral international system envisioned by China would expand the space for the CEE countries to be more independent in international politics.

It is planned that in the near future, the focus will be on three things: the construction of railways and roads and modernization of the ports; increasing the total volume of trade and investment; and development of a legal framework for further cooperation.

Undoubtedly, this will enhance cooperation and bring new benefits. However, we should pay attention to another dimension of their cooperation; namely multistate projects. Of all the recently completed or planned projects between Central and Eastern European countries and China, only one project involved China and more than one Central and Eastern European country. That is a project to modernize the railway between Belgrade and Budapest. In the next phase of this project, this corridor needs to be extended south to Skopje and the Greek port of Piraeus, so that a modern railway connects the Mediterranean with Central Europe. This project thus involves four countries: Hungary, Serbia, Macedonia and Greece.

One of the secrets of the success of the EU's projects in previous years is that the EU has insisted on the projects being multistate. This reinforces relations between the countries, improves cooperation, and helps share responsibilities.

The author is a professor at the Faculty for Diplomacy and Security in Belgrade, Serbia, and executive director of the Center for Strategic Alternatives in Serbia.