A new graffiti banner appeared on the stands of the football stadium of Sparta Prague in the Czech capital, media reported on January 24. It reads “Kosovo is Serbia”, and is a reference to the long-held views by the Sparta fans, but also fans at dozens of stadiums around Europe – from Warsaw and Athens to Paris and Madrid – that Kosovo is a province of Serbia and that unilateral Albanian separatism should not be rewarded.

The same phrase “Kosovo is Serbia”, painted on a train rallying Belgrade to Kosovska Mitrovica North – the only urban enclave in Kosovo from where Serbs had not been expelled since the war in 1999 – obtained not only extreme media attention but triggered a surprisingly high political attention worldwide. While Belgrade claimed the passenger train, on its promotional trip, was merely an expression of Serbia’s support to its integrity and to the suffering Kosovo Serbs, the Kosovo Albanians saw it as a provocation and sent dozens of armed vehicles to block its entry into what they consider as their own territory. Belgrade averted a conflict by stopping the train in central Serbia, but the political aftermath proved almost as tense.

Serbian president Tomislav Nikolic reacted by warning that any future attacks against Kosovo Serbs would be met by an armed response from Serbia, while Kosovo Albanian president Hashim Thaci warned that Serbia was looking at a “Crimea scenario” to take back Kosovo, and that Albanians were infuriated by the “painted” signs of Serbia’s claim to the province.

While the rhetoric was harsher than usual, it showed, however, a continuity of both sides’ policy on the Kosovo issue.

Belgrade, on one hand, continues to argue that Kosovo’s secession – which began with the 1999 NATO bombings and continued with a unilateral secession – is a dramatic violation of international law and a precedent for conflicts worldwide. Yet, similar to the train case, its Kosovo policy sometimes appears as a “one step forward, two steps back” policy. Serbia is fighting Kosovo’s entry into the UN institutions, such as UNESCO, yet it is giving up parts of sovereignty in Kosovo by agreeing to the demands of the European Union – and Germany in particular – in exchange for the opening of new EU negotiation chapters. The expected delay of Serbia’s potential entry to the EU – now put at 2027 – however fuels criticisms among those who believe that Serbia should not hurry with giving up on its sovereignty prerogatives, in particular in Serb-populated northern Kosovo.

The Kosovo Albanians, on the other side, have a long-term strategy of putting pressure by arguing that if they do not get everything they wanted, there will be chaos in Kosovo. It is a strategy which paid off in 1999 – when they triggered the NATO bombings, in 2004 – when they succeeded in obtaining the beginning of status talks, in 2008 – when they received Western support for a unilateral secession from Serbia, in 2011-2012 – when they received support for “rounding up” what they now perceive as their own sovereignty over Kosovo. Every time a crisis appears in Kosovo, the same Albanian rhetoric and threats are employed – every time with success. Why change then the scarecrow tactics?

Yet, changes in the US administration and elections Europe-wide which are boosting opponents of Kosovo’s secession, are fueling worry in Pristina. An “independent Kosovo” – a pet project of the Clinton family – is perhaps not as secure anymore.

Aleksandar Mitic, president of the Center for Strategic Alternatives 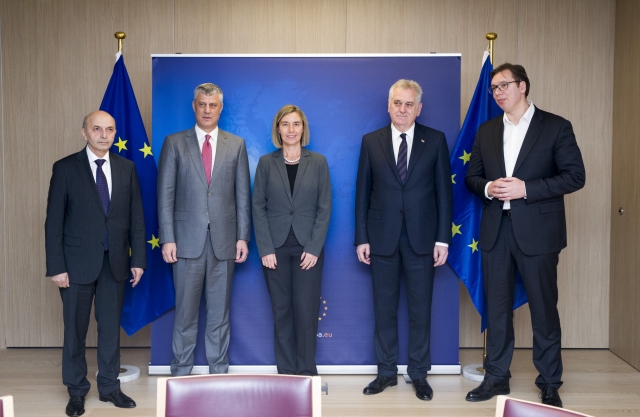