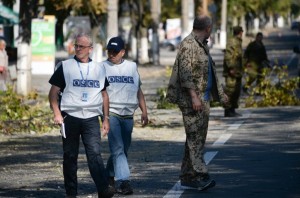 Serbian officials are citing Belgrade's chairmanship of the Organisation for Security and Cooperation in Europe in 2015 as a great opportunity for Serbia to prove itself as a stable factor in the world, but analysts warn that the country could find itself in an unenviable position balancing the West and Russia.

The fears are greater as Serbia, despite being an EU candidate country, has refused to impose sanctions on Moscow, which led to criticism from Brussels and pressure to harmonise its policy with the EU, which is punishing Moscow over the conflict in Ukraine.

"Serbia is an ideal state to preside over the OSCE until the Ukrainian problem is solved," Serbian President Tomislav Nikolic said in mid-October.

He said that Belgrade could bring about peace-making diplomacy because "it is friends with all who have some kind of conflict," mentioning among others China and Japan, Israel and Palestine, Georgia and Russia, Turkey and Greece, as well as Greece and Macedonia.

Serbian Foreign Minister Ivica Dacic said that the chairmanship of the OSCE is "Serbia's political priority and a great chance for the state to present itself in the world as a significant political factor."

Presenting the priorities of the chairmanship, he listed the strengthening of the OSCE's role in Ukraine and a complete end to hostilities, as well as reconciliation and the improvement of co-operation in the western Balkans.

"With its experience of a post-conflict society that has successfully overcome the legacy of conflicts in the region, Serbia can significantly contribute to the calming of conflicts on the OSCE agenda," Dacic said.

Expectations facing Belgrade are great both in the East and the West.

Russian Foreign Minister Sergey Lavrov said that Serbia would preside over the OSCE in a very important year and that he hoped for the organisation to play a bigger role in the Ukrainian crisis.

US Assistant Secretary of State Victoria Nuland said she spoke with Dacic about stability in Bosnia and Herzegovina and the situation in Ukraine, where Serbia, once it arrives at the helm of the OSCE, will play a key role.

Aleksandar Mitic, the director of the Centre for Strategic Alternatives NGO, said that all eyes will be on Belgrade. "Serbia will aim to perform a clear, straightforward, no nonsense OSCE presidency. It's an opportunity but also a potential landmine for Serbian diplomacy. Serbia must play strictly by the rules since all eyes will focus on whether an EU candidate but Moscow ally can perform an unbiased role during the ongoing Ukrainian crisis," Mitic told SETimes.

He added that a lot will depend on whether a ceasefire on the ground can hold.

"Nevertheless, if only Serbia had known two years ago -- when it received the nomination to chair the OSCE -- that it would have to deal with such a serious crisis, it would have done its best to freeze out," Mitic said.

Aleksandra Joksimovic of the Centre for Foreign Policy told SETimes that one cannot "expect miracles" of Belgrade during its time at the top of the OSCE.

"The Ukrainian crisis is a difficult global issue and it would not be good for Serbia to find itself between the East and the West over the situation," she said.

Joksimovic added that Belgrade would have to do some skilful balancing so it doesn't find itself under additional pressure.