President of the Center for Strategic Alternatives Aleksandar Mitić recalled his Kosovo war reporting memoirs from the 1999 NATO bombing in an interview to the Czech national radio "Česky rozhlas".

The interview was broadcast on May 4, 2019, on the occasion of the 20th anniversary of the NATO bombings against the Federal Republic of Yugoslavia.

Mitić was the Kosovo correspondent for Agence France-Presse (AFP). 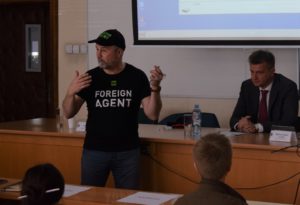