Giving legality to independence of Kosovo, the International Court of Justice (ICJ) has opened a Pandora's box, encouraging secessionists around the world in creating new, self-proclaimed states. Kosovo could be a trigger for potential disintegration of over 100 countries .

Kosovo, a southern part of Serbia, declared self-independence on February 2008. Referring to UN Resolution 1244 that reaffirm the sovereignty and territorial integrity of Serbia, all efforts of Serbian authorities to prevent the losing of sovereign territory, definitely failed on July 22 after International Courte of Justice (ICJ) concluded that "the adoption of the declaration of independence... did not violate any applicable rule of international law".

While Kosovo Albanians celebrated political victory with champagne, Serbian president Boris Tadic rejected the ICJ verdict, warning that the Court's opinion "establishes a new principle, an entire process of creating new states that could destabilize many regions of the world."

Having in a view a fact that over 100 countries are suffering the chronic problem of potential territorial disintegration, Kosovo could be a trigger for a "tsunami of secessionism" changing the existing map of the world.

According to Montevideo Convention of 1933 one country could be unilaterally or collectively recognised if it possesses "a permanent population, defined territory, a government that is in effective control of its territory and independent of any other authority and a capacity to enter into relations with other States".

USA secessionist movements are very persistent in idea to "dismember" the most powerful world's country to the smallest independent regions. The leading U.S separatist organisation and parties pretend in establishing 14 new independent states: Alaska, Republic of Lakotah, Republic of New Afrika, People's Republic of the North Star, New York State , Independent Long Island, Oklahoma, Cascadia, Northwest American Republic, Confederate States of America, South Carolina, Republic of Texas, Green Mountain Republic of Vermont, Hawaii. Less influential groups seek to set aside dozens of almost negligible counties as autonomous and independent mini-states such as Martha's Vineyard and Nantucket that tried unsuccessfully to secede from Massachusetts and USA in 1977. From 1850 up to now there have been 27 various attempts for partition of California. The three most persistent ethnic groups that advocate the USA secessionism are Afro Americans, Native Americans (originated from different Indians tribes) and white Anglo-Saxon ethnic group.

Canada could be disintegrated into 6 new countries: Newfoundland, Nova Scotia, Quebec, Western Canada, Manitoba and federation British Colombia and Yukon. The Clarity Act issued in 2000 enables provinces to legally secede from Canada if they meet the rules defined by the law.

Belgium nationalist parties have been endeavouring for decades to divide Belgium into two new independent states: Dutch-speaking Flemish Republic and French-speaking Wallonia. Left-wing Frisian National Party advocates for autonomy of Netherland's region Frisia insisting on the own government, Frisian language and, before all, on control over Frisian gas reserves. Independent Frisia would be extended from the north-western Netherlands across north-western Germany to the border of Denmark. Netherland overseas territories Aruba, Netherlands Antilles and Saint Maarten seek own sovereignty.

Germany's sore point is Bavaria while Portugal's Democratic Party of Atlantic promotes autonomy for the exotic Azores following the case of Bermuda Islands, British overseas territory, Aruba, Netherlands Antilles and Saint Maarten hose Premier in 2004 announced the formation of Bermuda Independence Commission while considering the potential of cutting ties with the British Crown.

Switzerland, one of the most economically stable country in world and one of the first who recognised Kosovo due to strong influence of Albanian lobby in " country of chocolate", seriously faces the potential separations of cantons Jura, Roman and Ticino for decades now. 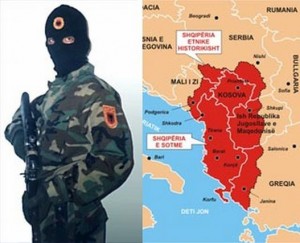 Inuit Radical Party advocates the independence of Greenland who belongs to Denmark as an administrative region. In 2009, Denmark Government made a step forward giving the limited autonomy to Greenlanders. They got right on self-government of judicial affairs, policing, and natural resources. Also, they are recognized as a separate people under international law. Faroe Islands requests for a years the separation from the Danish Kingdom.

Finland, whose ex-president Marti Ahtisaari initiated and supported the independent Kosovo, within the so-called "Ahtisaari plan" is on the way to lose the own Kosovo. Swedish secessionist party "The Future of Åland" tends to separate the Åland Islands, Finnish administrative area, into an independent region joining them with the European Union. Although the Åland, as part of Finland joined the European Union, its inhabitants have already a "special status". They are not subject to the EU tax system (VAT and taxes on alcohol). Persons who are not regional citizens are denied the opportunity to own real estate. They can get citizenship after five years of residence in Åland after passing the test in Finnish or Swedish

Members of the Finnish Sami population living in Finnish area Karelia plan to reunify with their compatriots in Norway, Sweden and Russia establishing independent country Sapmi from the parts of those countries.

Kurdish people, one of the most numerous ethnic population without formal and internationally recognized state, are adherent to the idea of Kurdistan including parts of Turkey, Syria, Iraq, Iran, Azerbaijan, Armenia in Armenia, Georgia, Israel, Russia, and Lebanon. Each of these countries openly feared for their own territorial integrity taking various type of suppressive measures against Kurds from prohibition of Kurdish language in Syria to mass killing by chemical poisoning in Iraq during the government of Saddam Hussein.

Turkish government rejects any notion of the existence of Turkish Kurdistan, although this population is present in even 13 Turkish provinces. In same time the Turkish government has territorial claims over the northern part of the island of Cyprus that is already declared as "de facto independent state". In order to avoid military conflict, the island was divided into two parts, with the southern part that belonged to the Greeks.

Japan, a homeland of Hisashi Owada, the president of International Courte of Justice and one of 10 judges who voted for legality of Kosovo declaration, could lose even three islands: Ainu, Hokkaido and Okinawa with Ryukyu Islands under new name Ryukyu Republic. Two Malaysian regions, Sabah and Sarawak try to secede from "mother-country".

Indigenous Maori people seek autonomy in New Zealand. Same requests have Cook Islands, Niue, Tokelau. Western Australia wants their own state not forgetting the referendum from1933 when 68% of the 237,198 voters voted in favour of separation. Christmas Island and Norflok Islands, as a part of soverign Australian territory tend to establish independent states.

Costa Rica, a first country that recognised Kosovo faces the potential separation of two provinces Guanacaste and Limon. Colombian separatists dream to divide this South American country on three independent territories: Republic of Antioquia, Autonomous Region Caribbean and region associate of Raizals Archipelago of San Andrés, Providencia and Santa Catalina. Tupac Catary Guerrilla Army have made several attempts to secede region Arequipa from Peru and even designed the city's own passport and flag. Mexican state is at risk to lose the region of Chiapas, where in 2000, Zapatista National Liberation Army (EZLN) autotomized a number of jungle villages. In August 2003, the EZLN self- declared all Zapatista territory as an autonomous government independent of the Mexican state.

From the group of 12 Kosovo-friendly African countries, four of them are on the way to be disintegrated. Bloody civil war in Somalia started in 1991 could divide this country into four new states: State of Southwestern Somalia, States of the Central Somalia, Republic of Puntland State of Somalia and Republic of Somaliland. Dominant ethnic group Diola try to separate Casamance region (part of Senegal south of tThe Gambia including the Casamance River). Violent separatist movement is in bloody conflict with Senegalese government forces for decades. Southern islands of Maldives are trying to unite in United Suvadivian Republic while Anjouan and Moheli want to separate from Comores.

No dilemma: Kosovo is everywhere. It is a question of time when the "domino effect" will hit the rest of the planet. But before new Kosovo happened "masters from the shadow" should recall the Hawar Archipelago case from 2001. After 200 years of territorial dispute between Qatar and Bahrain relating to sovereignty over the Hawar islands, ICJ found Solomonic solution: between two countries was set up a new maritime border that satisfied both sides giving new chance to regional and world peace. Isn't Hawar's "receipt" an ideal solution for politically fallen planet?